Introduction to the Special Issue on Distributed Hybrid Systems 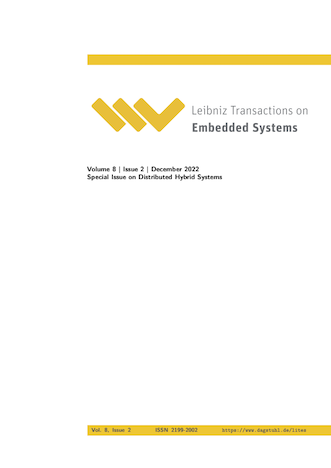 This work is licensed under a Creative Commons Attribution 4.0 International License.

This special issue contains seven papers within the broad subject of Distributed Hybrid Systems, that is, systems combining hybrid discrete-continuous state spaces with elements of concurrency and logical or spatial distribution. It follows up on several workshops on the same theme which were held between 2017 and 2019 and organized by the editors of this volume.
The first of these workshops was held in Aalborg, Denmark, in August 2017 and associated with the MFCS conference. It featured invited talks by Alessandro Abate, Martin Fränzle, Kim G. Larsen, Martin Raussen, and Rafael Wisniewski. The second workshop was held in Palaiseau, France, in July 2018, with invited talks by Luc Jaulin, Thao Dang, Lisbeth Fajstrup, Emmanuel Ledinot, and André Platzer. The third workshop was held in Amsterdam, The Netherlands, in August 2019, associated with the CONCUR conference. It featured a special theme on distributed robotics and had invited talks by Majid Zamani, Hervé de Forges, and Xavier Urbain.
The vision and purpose of the DHS workshops was to connect researchers working in real-time systems, hybrid systems, control theory, formal verification, distributed computing, and concurrency theory, in order to advance the subject of distributed hybrid systems. Such systems are abundant and often safety-critical, but ensuring their correct functioning can in general be challenging. The investigation of their dynamics by analysis tools from the aforementioned domains remains fragmentary, providing the rationale behind the workshops: it was conceived that convergence and interaction of theories, methods, and tools from these different areas was needed in order to advance the subject.